Raccoon removal can be frustrating if you don’t know what you’re doing. 24/7 Wildlife Removal can get rid of raccoons without any issues. You can trust our wildlife removal professionals to quickly eliminate and remove any raccoons getting to close for comfort. Call Now! 1-866-290-8727.

Your place and its structure will be thoroughly inspected for any signs intrusion and all points of entry. We can determine what the best practice for raccoon removal services will follow.

All repairs needed from the damaged caused by raccoons as well as their points of entry will be addressed and if when requested, the 24/7 Wildlife Removal professional will seal and repair as necessary.

Eaccoons may cause lots of damage to peoples property but the feces and urine they leave behind may never be seen. The foul smell can be contained in between walls and ceilings, insulation or any place inaccessible by humans. In most cases people wont know the amount of raccoon latrine (feces) left after the raccoons are long gone.

24/7 Wildlife Removal professionals can help you inspect and clean up all raccoon feces properly. We understand the nature of the process needed in order to adequately clean up this hazardous fecal excrement. After all it is a viral contaminant that can harm you and cause many health problems

After the proper abatement (clean up) we will deodorize the affected area so that all the foul urine smell wont become overwhelming and linger for long. 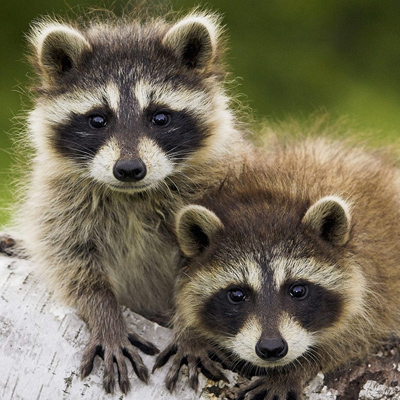 It is important to know about raccoons when you are experiencing raccoon problems. If you don’t know already what a raccoon looks like, than we strongly advise you to browse through our raccoon images.

Raccoons are known for their mischievous like behavior during the nights. They are often spotted scavenging through people’s trash. They have a shadow like or dark mask across their face covering their eyes and a short/small nose. A raccoon’s tail has a black and brownish ring like pattern. Fully-grown adults can grow up to 39 lbs. in weight and vary in size from 24 to 47 inches in length. Mating season is between January and February . The female raccoon goes into a 63 day gestation period followed by the birth of 3 to 6 baby raccoons. These babies will stay close for more or less a year.

Although raccoons are usually very quiet animals, they can be noisy at times. They can be heard by their high pitch squeals and growls. Like most animals they will show signs of aggression when threatened. The babies sound like birds and are often mistaken for birds when the noise is coming from attics, ceilings, crawlspaces or any part of a property the may enter to nest

Raccoons are nocturnal creatures and are mostly seen at night. You may however see some female raccoons during the spring searching for food to feed the babies during the day as they may feel it is safer to leave the litter unattended as they to me alert at all times during the night in order to protect the babies against other raccoons or predators.

Raccoon droppings are known to contain round worm (Baylisascaris). A parasite which resides in the raccoons small intestine and will grow and reproduce in the fecal matter left by raccoons. It affects humans by the infections caused by ingestion of these parasitic eggs. Children are the most vulnerable because of the likely hood of placing objects that made contact with the ground or surface where raccoon fecal excrement (poop) may have once been.

When inside our stomachs, the larvae (developing eggs) quickly move to the nervous tissue, primarily the brain and eyes. Even though under reported, the few human cases of roundworm infections were fatal due to the difficulty of diagnosing. It is very common to mistake this roundworm infection with a flue or more commonly reported viruses.

Infections in the nervous system caused by raccoon roundworm may appear as within two to four weeks after ingestion of eggs. All round worm infection symptoms range from mild neurological signs to more severe paralysis, coma, blindness, and death. It is still poorly understood how people are affected by these infections, but it appears the greater number of eggs ingested results in more severe infections.

Diagnosing Raccoon round worm infections is very difficult unless a person exhibits symptoms. Once an infection becomes advanced, current treatments are usually ineffective. Because a "cure" does not exist for this disease, prevention is the most effective means of controlling the disease.